1.) SPIRAL OF SILENCE IN AMERICA
As I was a reading through the course pathwright I stumbled upon this topic ver early and it immediately became very interesting to me. The Spiral of Silence is a theory put forward by Noelle-Neumann the explains the likelihood of individuals expressing there political opinion. This is very important especially in todays world because peoples political allegiances are so big in todays world. If you are Republican today it is assumed that you have racist qualities and if you are liberal it is assumed that you are so far left that you can not be saved. Having read through the article the theory is defined when the author says “ a) individuals develop a perception of what the majority opinion is and whether other individuals support it; (b) the willingness to express an opinion is determined by the perceived support for it; (c) as perceptions of a contrary majority opinion increase, the likelihood of expressing a perceived minority opinion decreases; (d) as conflicting opinions are repressed, a spiral of silence is created where only one group has a voice in the conflict and other groups are increasingly more silent; (e) as conflicting opinions become more repressed, the actual majority can become silenced, and the minority opinion can become commonly perceived as the majority opinion and force compliance.”. This stuck out to me so heavily because we have all had these conversations before and this theory can be applied PERFECTLY. This ties into the concept of Group Think that  I have read into in my other classes. Essentially people will only voice there political party if it is apart of the majority opinion. The political climate of America is so judgemental today and I think that the Spiral of Silence is at an all time high in our country.
2.)BREAKOUT THE FIREHOSE-
A term that we studied throughout the semester was Firehosing and this video delves into the similarities of what the Russians are doing comparatively to the United States.

Firehosing as the video says is a tactic used by the Russian government to pump out propaganda. In this tactic they do not worry about the truthfulness of the statement and this is made evident in the video when Putin talks about the Russian troops at the Ukrainian border. However the video reminded me of some propaganda I have seen particularly in the last couple of years put out by the United States. The propaganda is absurd and there is so much of it  that it is impossible to decipher the truth. There is such a lack of credibility on both sides the messages that are received are basically just repeated and eventually taken in by the public. This tactic shows that the government is merely trying to push an agenda of power and that they are above the reality.

3.). THE INFORMATION DISORDER-
The information disorder breaks down like this, because there is so much ‘fake news’ the term ‘fake news’ is no longer an adequate way of describing it. The experiment written by Claire Wardle and Hossein Derakhshan proves the following “ In this module participants will learn why that term is a) inadequate for explaining the scale of information pollution, and b) why the term has become so problematic that we should avoid using it.(Wardle,Derakhshan)”. It breaks down into disinformation, misinformation, and mal-information each one symbolizing the different types of ‘fake new’ being put out. Disinformation is when a source knowingly lies, misinformation stems a lot from social media and people spreading false rumors and lastly malinformation is say emails being leaked to hurt someones credibility. They all fall into there own categories and provide a specific dynamic to the media we live in today. So lastly what Wardle and Derakhshan are saying is that just calling all of these fake news is not focused enough to capture there whole impact.
4.) KONY MUST GO-
https://ant.umn.edu/ipvpdspwhv/view
I selected this video because I can remember so vividly walking up and down the halls of my school and seeing the red and blue posters hanging all over the walls. The campaign was for a good cause but what you see here is. interesting because when people think propaganda they think it is always produced by the government. This video clearly shows that one of the most successful propaganda campaigns ever was produced by a man and a little known corperation. It is so important for people to see videos like these because not only does it show you the success that you can have but it also highlights where you need attack. This video tells you like it is and that is that unless you are affecting the national security or the economy you will not get to much support from the government. They had to go out and work to create hype and used facebook and other social media outlets to do it. It shows that if you work hard and stay committed you can make a difference! 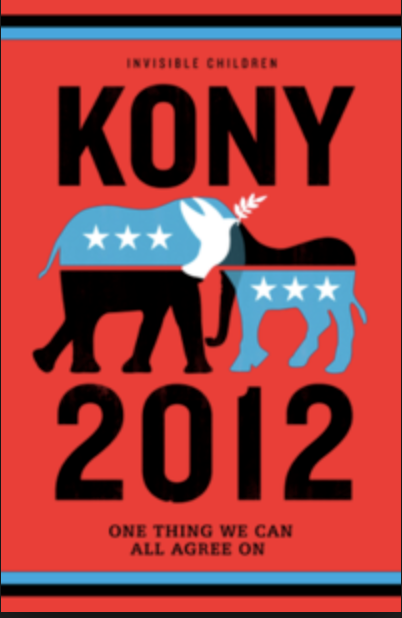 ​In the study author Christian Fuchs is taking Chomsky’s propaganda model nd relating to a more modern day publication. The best quote comes early when Fuch’s says “The key aspect is that wealth and power inequalities shape what is considered newsworthy, what gets reported, and what is heard, read and watched.(Fuchs,ch.6)”, it says that the flow of money is really what you are seeing not necessarily what is right or wrong. The thing about stuff like this is that the general public has next to no knowledge on it so they can be easily swayed one way or the other.  The statement the article makes that the primary income of media outlets is advertising tells you everything you need to know as more content moves toward  being online content is instantly accessible, making it even more confusing as to what can be taken as truth and what can not. The study of Chomsky’s model being relevant holds true because the world around us is still shaped by the same values but the medium they are transmitted through is different.

6.) ITS ALL A LIE-
https://www.youtube.com/watch?v=BIzWRTCMk0k#action=share
The video by Ryan Holiday was a really cool way of looking at how people can create there own news and get it out there. It highlights a key concept in the news today and that is that almost anyone can create these news stories. What it did for me personally was clear up the ‘fact checkers’ debate. I always thought that in order for a story to make it to the news there would have to be at least one person that would have to check the validity of the story and that is just not true. It leads to the age old saying “if they don’t have a story they will make one.”, and in my eyes it gives a whole new meaning to that saying because it really is true.
7.) LEAP TO CONCLUSIONS-
As we m over along in the semester and got further into our own leap projects I really enjoyed the 2nd of the three projects. Me and my partner took two pieces of propaganda and compared and contrasted them looking for key differences. This is so important because I assumed having only seen American propaganda for the most part that they would all be somewhat similar. In reality nothing could be further from the truth, they all have there own messages to convey and based off of there culture they have to do it in very different ways. 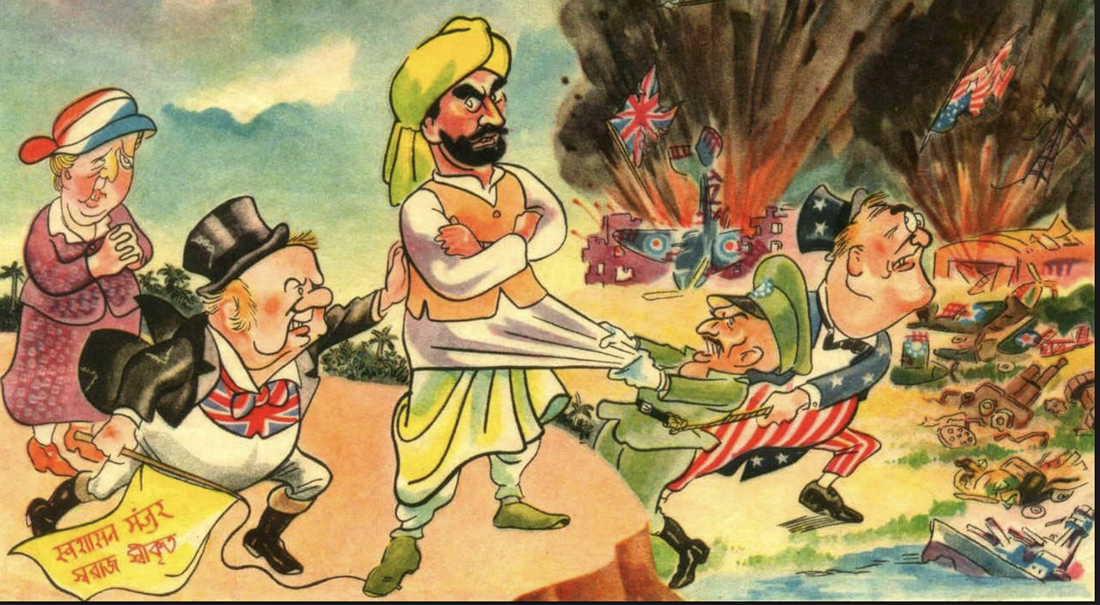 A piece of Indian propaganda shows a fight between the U.S. and Britain over India and its allegiance. You would never see the U.S. or Britain portrayed like this in there propaganda and that was so interesting to me to see the different ways that the world looks at us as a country. The main thing thatI have seen portrayed is that the U.S. is a greedy country looking out for its own self inteerest.
​

8.) PARTISAN PROPAGANDA-
As I have noticed going through the class two of the biggest producers of propaganda are the Democrats and Republicans. What I have noticed is that they become so counter productive trying kill the other parties propaganda that they lose sight of themselves.
https://www.youtube.com/watch?v=iqVjvxMbgQI#action=share
This video allows us to see a small piece of the Republicans saying that there is a ‘coup’ in place to remove Donald Trump from office. They use the word coup because it evokes emotions, when I think of a coup I think medieval times and a king being forcefully removed form his thrown. They use this word as an attention grabber to bring people in and once it worked you can clearly see that all of the news Chanels started putting it out the same way. Again because people are generally not informed about the topic they believe what they are hearing come through there T.V. no matter if it is correct or not.
9.) THE MODERN DAY NAZIS-
This part of the class spoke to me because so many of the problems we face today as a country are race driven. For me however because people rarely see these NEO NAZI groups out and in action they do not believe that they could possibly be a real threat. The article provided in the pathwright says “Within the confines of a secure chat room viewed by VICE, Spear and his burgeoning global web of terror cells are networking, creating propaganda, organizing in-person meet-ups, and discussing potential violence or “direct action” against minority groups, especially Jewish and black Americans.” It highlights that the  threat is very real. Not only that it is real but that these groups are actively planning violently strike out against minorities. It is so important to learn this stuff because as a whit male in America this group is not targeting me specifically but I would be the person that would have the best chance of stopping it or bringing it to light.
10.) NO REAL FREE WILL-
Finally I read through and watched videos about a youth group in Russia that came together to make pro Russian propaganda. The catch here is that there was only one rule as the group was working on there projects. It was non-negotiable that they had to show full support of President Vladimir Putin and his office. The group focused on pro Russian and anti united states propaganda and this made it more clear to me that you just can not trust propaganda at all. These talented artists from all over Russia come together to work and are being forced to bury there true artistic ability because Putin does not want anything bad to be said about him. Almost all governments participate in this behavior at some level and I just can not wrap my head around how much control the government has over what we see and how we see it. It was so meaningful to me because as you see Russia is doing this and I am sure that the Russian people are relatively immune to it and do not know this is. how they get there news. Having said that then it puts a lack of trust in our own government for me because you can never really understand what goes on behind those closed doors.


SPARK VIDEO:
The video cannot upload to here so I sent it to you in email form